Anti-Defamation League (ADL- İftira ve Karalama ile Mücadele Birliği), ulusal direktörü Abraham Foxman, Sunday’s Zaman gazetesine gönderdiği e-mailinde; “AKP’nin Antisemit ve Batı Karşıtı Söylemi Tehlikeli Bir Eğilim” değerlendirmesi yaptı. Türkiye’deki gelişmeler konusunda; siyasi rakiplerin, yabancı ülkeler ve dini grupların şeytanlaştırılması girişimlerinin hiç bir zaman politik bir araç kullanılmaması gerekliliğini vurguladı. ADL Antisemitizm, nefret, önyargı ve bağnazlıklara karşı mücadele eden, ABD ve dünyanın önde gelen organizasyonlarından biri.
Today’s Zaman / Deniz Arslan “AK Party’s anti-Semitic, anti-Western rhetoric a dangerous trend” haberi:
Abraham Foxman, the national director of the Anti-Defamation League (ADL), the world’s leading organization in the fight against anti-Semitism, hatred, prejudice and bigotry, has stated that the “demonization of political opponents, foreign countries and religious groups is never an appropriate political tool,” adding that Turkey has a centuries-long history of protecting its Jewish citizens and that the ADL is “hopeful that tradition will prevail in these difficult times.”
“Going back to the Taksim Square protests [Gezi Park protests in İstanbul last summer], with the upcoming municipal elections in Turkey, followed by the presidential election and elections for parliament and the turmoil on Turkey’s border with Syria, the uncertainty caused by the political calendar seems to be playing a troubling role in the public rhetoric of Prime Minister [Recep] Tayyip Erdoğan and his supporters in the AKP [Justice and Development Party (AK Party)],” Foxman wrote in an exclusive e-mail to Sunday’s Zaman.
Foxman’s comments come after former Economy Minister Zafer Çağlayan made remarks denigrating Jews, Zoroastrians and atheists in a speech on March 8. Çağlayan, who stepped down from his position in December due to allegations of corruption, made the comment at a political rally, where he tried to ponder why a Muslim would attack his party. “This nation is aware of what kind of mentality we are struggling with,” he said, according to press reports, adding: “I have many things to say [about this topic]. If Jews, Zoroastrians or atheists did this to us, I would understand. But someone who does this [speaks out against the government] is passing himself off as a Muslim, shame on him.”
With his comments, Çağlayan was in fact targeting Islamic scholar Fethullah Gülen, who has been accused of creating a “state within a state” by AK Party officials since the police launched a corruption and bribery investigation on Dec. 17. The AK Party government has purged many police officers and prosecutors, saying that they are under Gülen’s control, and has rearranged the judicial system so the executive branch of the government has a tighter grip over the judiciary. 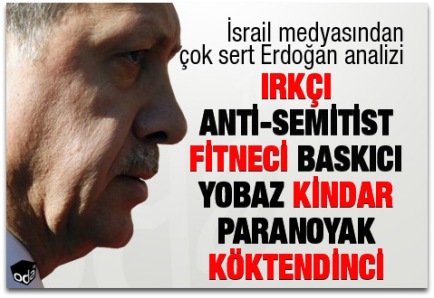 Erdoğan himself has used the same style of rhetoric to single out Israel and the Jewish people since December, and has claimed that the corruption investigation was engineered by the police and judiciary to undermine his government and sap its influence in the Middle East and beyond. He has said that there is a “foreign plot” against the AK Party government and that “a country in the south” is involved in this, implicitly referring to Israel. Right after the start of the investigation, Erdoğan threatened to expel the United States’ ambassador to Turkey, Francis Ricciardone, suggesting that he is behind an operation to topple the current administration, a claim that was denied by the US shortly thereafter.
Foxman said that conspiracy theories suggesting a concerted effort to disrupt or interfere with internal political stability have been used for centuries to justify discrimination against Jews, by appealing to the xenophobic fears and ignorance of the masses. He also mentioned that the tensions between Turkey and Israel, which have been ongoing for nearly four years, also add to concerns that Jews in Turkey may be singled out for discriminatory treatment. But he expressed hope that Turkey’s long history of protecting its Jewish citizens will prevail in these difficult times.
Anti-Semitic incitement in Turkey has reportedly increased since the 2010 Mavi Marmara incident, in which eight Turkish nationals and one Turkish-American were killed by Israeli soldiers on a Gaza-bound flotilla carrying humanitarian aid. The incident caused a downgrading of diplomatic ties between Turkey and Israel, with the Israeli ambassador being expelled from Ankara in September 2011 after Israel refused to apologize for the killings.
Turkey asked for three things from Israel in light of the incident: an apology, compensation to the families of the victims and the lifting of the Gaza blockade. Israel formally apologized in 2013 for what it called “operational mistakes” that might have led to the death of Turkish citizens. Currently, Turkey and Israel are negotiating a compensation deal, but an agreement has not yet come forth. In July, Erdoğan called Israel a “crime against humanity.” He later apologized for the remark to Israeli Prime Minister Benjamin Netanyahu over the phone.
Two Turkish Jewish businessmen fled a restaurant in Turkey after being threatened by its knife-wielding owner in an anti-Semitic incident in February, according to the ADL. The businessmen were visiting clients in the northwestern town of Babaeski and had stopped at a fish restaurant for lunch. The restaurant owner reportedly realized they were Jewish and began shouting anti-Semitic epithets and saying he would not serve the men, according to reports. The owner then reportedly came after the men with a döner knife — a large, sword-like blade for cutting meat. The men fled the restaurant.
Approximately 20,000 Jews currently live in Turkey, according to the US State Department’s 2013 Human Rights Report. “In response to the corruption allegations, the prime minister and several senior government officials publicly blamed ‘shadowy’ international groups, attributing problems to an alleged international Jewish conspiracy, the ‘interest rate lobby’ [and] the ‘Neocons’,” the report said.
Erdoğan resorts to usual suspects and accuses outside forces
Faruk Loğoğlu, deputy chairman of the main opposition Republican People’s Party (CHP), told Sunday’s Zaman: “On the eve of the upcoming local elections, Erdoğan is in deep trouble, facing an unavoidable downturn in his political fortune. As expected, whenever he panics, he resorts to his usual suspects and accuses outside forces of conjuring up conspiracies against him. His favorite scapegoats are the West, the US, Israel and their extensions, especially the ‘interest lobby.’ In this connection, Erdoğan and his cohorts unfortunately often overstep boundaries and make statements that are anti-Semitic in nature.”
Loğoğlu said the CHP categorically rejects any manifestation of anti-Semitic behavior and discourse, whether in Turkey or elsewhere. “We strongly blame Erdoğan and his cohorts for hurting the feelings of our citizens of Jewish origin and for endangering their well-being and safety. No one should forget that that the family of nations views anti-Semitism as a crime against humanity. The CHP stands in solidarity with our citizens of Jewish origin,” he stated.
Cenk Sidar, founder and CEO of Sidar Global Advisors (SGA), a Washington, D.C.-based macro insight and strategic advisory firm, told Sunday’s Zaman that he does not believe the statements of AK Party officials will create an anti-Western or anti-Semitic trend on a macro level in the country. “What is at stake is the coherency of the government and its legitimacy in the Western world,” said Sidar, adding that the harsh rhetoric used by Erdoğan and his inner circle to consolidate their base in Turkey is “a dangerous gamble.”